Infrastructure Bill Has Majority Support From Voters Ahead of House Votehttps://morningconsult.com/2021/09/27/infrastructure-bill-support-polling/ …

The fact that she tweeted this…

GOP Rep. Liz Cheney said in a CBS 60 Minutes interview that she was wrong for her earlier opposition to same-sex marriage. Her stance led to a public falling out with her sister Mary, who is gay and married with children.https://n.pr/3D68JI7

Schumer is exactly right to say Republicans are doing a “dine and dash” with their refusal to collaborate on raising/suspending the debt ceiling. Reminder — Senate Republicans allowed Trump to add $𝟕.𝟖 𝐭𝐫𝐢𝐥𝐥𝐢𝐨𝐧 to the national debt over his single term in office.

In a new report for the US Immigration Policy Center, @owoldemik, Mitchell Kilborn, and I find that refugee resettlement does not negatively impact state and local expenditures, using data from 1967-2018. https://usipc.ucsd.edu/publications/usipc-fiscal-impact-refugee-resettlement.pdf …

NEW: South Dakota Governor @KristiNoem abused her position to get her daughter’s application to become a real estate appraiser approved after a state agency moved to deny the app. Noem called state employees to her office to meet w/ daughter & agency head was pushed to retire.

This young lady is not her father (though she likes to name him frequently). She lies on camera, she has zero value as a guest, certainly she’s go no credibility as a political talking head. And yet, Meet the Press fails by allowing her to lie on their air.https://twitter.com/justinbaragona/status/1442162037027586056 …

We still need to know the truth about Matt Gaetz implicating Tucker Carlson in the allegations against him for sex trafficking and raping a minor. Keep demanding answers.pic.twitter.com/TIuh6eDNUN 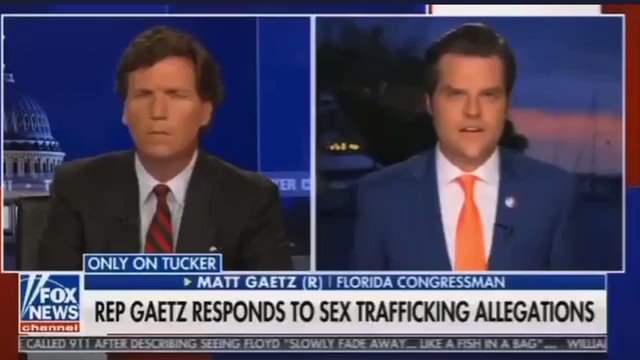 “There’s nothing Trump could do at this point that would invalidate him in the eyes of the political press, and that includes him shooting someone in the middle of Fifth Avenue.” — ⁦@EricBoehlert⁩https://pressrun.media/p/they-miss-trump-so-much …

Marjorie Taylor Greene does not belong in the United States Congress. She is a domestic terror threat, frequently accosting and harassing public officials on Capitol Hill. She is a national disgrace. She must be expelled.

Merkel has been a global power player for the entire time I’ve covered Washington. Major shift about to take place on the world stage, regardless of the final outcome in Germany.https://apnews.com/article/14ddbbb09c8c9ea194155a73de0970e2 …

IFE Spotlight: IFE fellow @Ali_Wyne, of Eurasia Group, says Australia’s nuclear submarine deal with the U.S. and U.K. is going to shift the military balance of power slightly away from Beijing.https://www.cnbc.com/video/2021/09/20/china-may-hasten-military-modernization-amid-aukus-submarine-deal-expert.html …

She is ignoring the people who elected her. This move, while largely symbolic, makes that clear.

NEW: the Arizona Democratic Party has passed a resolution pledging a 𝐯𝐨𝐭𝐞 𝐨𝐟 𝐧𝐨 𝐜𝐨𝐧𝐟𝐢𝐝𝐞𝐧𝐜𝐞 in @KyrstenSinema if she refuses to vote to reform the filibuster.